Beyond all the new hotness out there another perk of working in a bicycle shop is the chance to see cycling relics from yesteryear (if that is your sort of thing). About once a week, throughout the year we will see an older road or mountain bike come through the door for service. Sometimes these are bicycles like the 1984 Raleigh record sprint, with its fancy aerodynamic styling and cool gold accents. 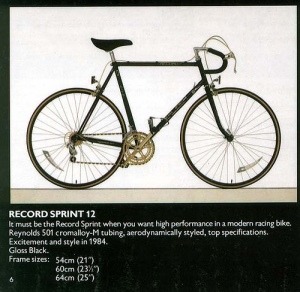 One nice thing about many older road bikes is the way they have been preserved either through low mileage combined with garage storage, or an impenetrable coating of grease-dirt that keeps rust at bay. Through the dirt I spied an old Maillard helico-matic rear hub.

What makes this old 6 speed freewheel setup unique is how they mount the freewheel to the hub. If you have ever worked in a bike shop then perhaps you have come across a super cool maillard lockring wrench/bottle opener/spoke wrench that is flat as a credit card. 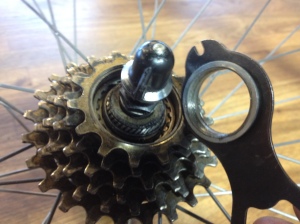 The splined circular end of the tool engages on a lockring that requires a surprisingly small amount of force to tighten down (a far cry from the required 40 NM to secure a modern cassette lockring, the maillard lockring is more like 2NM)

The freewheel unit then easily slides of the helically cut splines of the hub shell. You don’t see something like that everyday.

Another trait that sets this design apart from a common freewheel/hub design is where they place the drive-side bearing.

Most thread on freewheels force the drive-side bearing to reside practically in the center of the hub which decreases the leverage the bearings have on load applied to them. Think of it this way, if you feet are close together and someone tries to push you over it takes a lot more effort to keep yourself stable. Stand with you feet farther apart and that push is much easier to overcome because of the leverage your legs have on the ground facilitated by you feet standing farther apart.

So they were a bit ahead of their time when it came to rear hub design, bearing spacing became one of the major benefits to converting to a soon to be standard cassette freehub.

While this seems like a great innovation, unfortunately time would prove the hub to be “poorly executed, with chronic axle/bearing issues as well as being prone to spoke breakage”.

Check Sheldon Brown for the full scoop on these French made hubs.

So it was futuristic and awesome in a tragic way, seems like modern wheels take the cake when it comes to design and performance. You might think so, but the next question is for how long? The old bikes of the world fire back with highly skilled wheel builds, less required dish, top quality hub/rim/spoke combos, and sturdy proven cup and cone bearings. Just take a look at this.

Don’t mind the skewer on the wrong side of the bontrager wheel, it is to display on a wall and the nut side is in the wall..

We can’t even see the spokes on the DS of the modern wheel. They are fully covered by the rim when viewed dead on. A perfect example of dish comparison between different shifting systems and the effect they have on wheelbuild requirements.

However we do live in the modern, future times uninhibited by dusty old technology. Today we build low spoke count, gram pinching, ultra efficient wheels that are very fast and incredibly durable despite the missing spokes and lack of metal rim contruction.

I have seen plenty of low spoke count wheelsets hit the 9-10,000 mile mark, but then they were scrap metal.

This old dura ace/mavic tubular wheel has done untold thousands of miles and the bearings are smooth as glass, even better the build was still serviceable in the true stand. The old freewheel displays no slop and has a sharp sound with very little drag, a testament standing to show how well things use to be made. 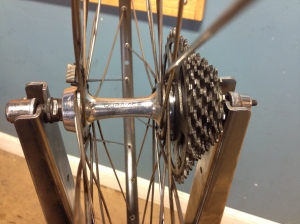 I suppose my point is that it doesn’t matter what shifting system you use or how modern or light the bicycle is. At the end of the day you have the same gear ratios delivered by the same 100+ year old design getting you from A to B. A heavy bike can be pedaled up to speed and maintain it just as well as an ultra light version built by scientists out of space rock.